The 2019 Arbuckle Mountain Futurity was packed with long days and long nights but that is a sign of a successful event!  It is the next to last leg of the winter run of shows that begins each show season.  Even though everyone is getting tired they continue on showing that cutting is alive and well!

The Non-Pro and Amateur cutters finished out the show starting with the two Non-Pro finals.  The Derby Non-Pro was first with Kelsey Johnson and Smart Cat Rey RG (Dual Smart Rey x Smart Cat Moria), owned by Curtis and Brenda Weeks, marking a 222!  They claimed the $12,724.24 check to add to their number of finalists checks so far in their short career together.  Their future in the show pen is definitely looking bright!

Reserve Champion was Contance Jaeggi marking a 220 riding Sueper Trouper (Dual Smart Rey x Ichis My Choice), owned by J5 Horse Ranch Management.  They received a $10,554.77 check along with the title.  They were also the Novice Division Champions adding $2,038.40 to their earnings and another $1,568 for the Gelding Division Championship.

The Limited Division Champion was Collbran Larsen riding Boon Lettie, owned by Dana and Wilma Larsen.  They collected a $1,881.60 check for the win. 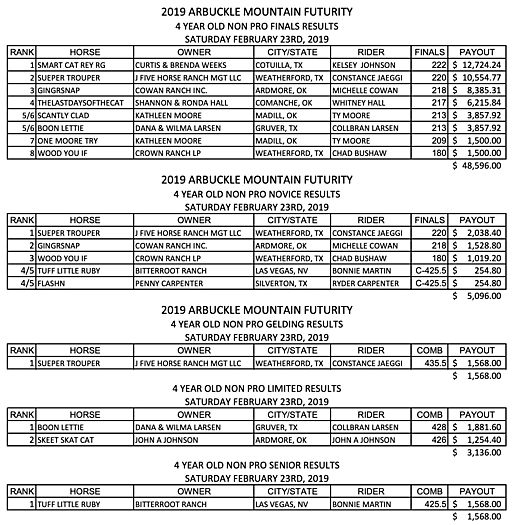 The Classic Non-Pro was up next with Ashley Flynn and Smooth Lines (Smooth As A Cat x Okie Skyline), owned by she and her husband Sean, claiming another championship in their impressive record.  These two have quite the bond and are always a force to be reckoned with.  They marked a 222 for this win adding $4,500 to their earnings. 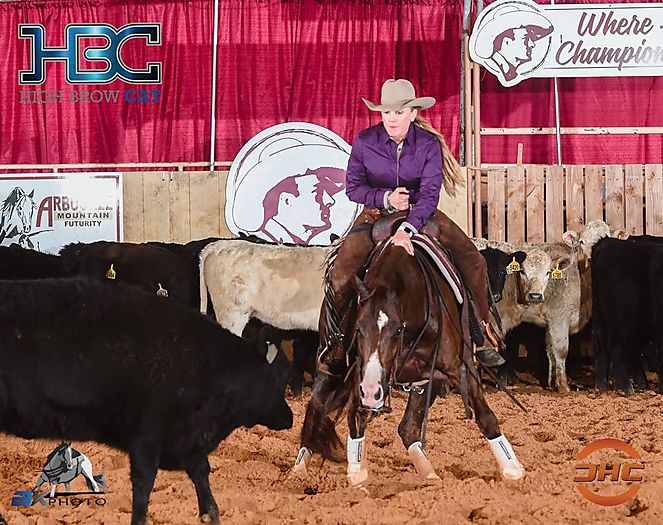 Reserve Champion was Chelsea Tatum marking a 218.5 aboard Bobs Smart Rey (Dual Rey x Bobs Smart Chance), owned by she and her husband Cass.  They collected a $3,700 check along with a $1,176 for the Limited Division Championship as well. 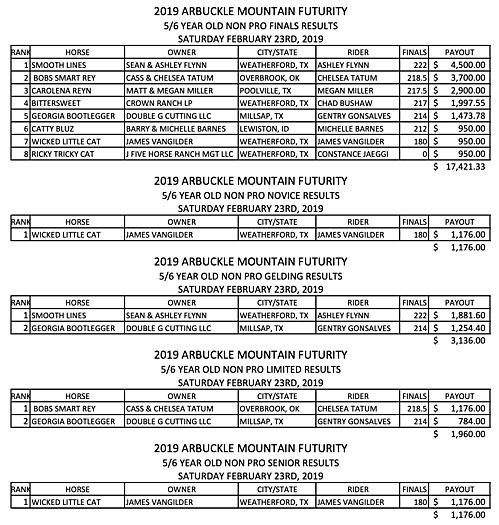 The Amateur classes rounded out the final day of the show starting with the Derby Unlimited Amateur.  Gary Barker and Exs N Ohhs (Kit Kat Sugar x Reycey Moon), owned by The Barker Ranch Cutting Horses, took home the Championship marking a 222.  They collected a $3,033.89 Champion’s check.  They were also the Senior Division Champions adding another $999.60 to their earnings. 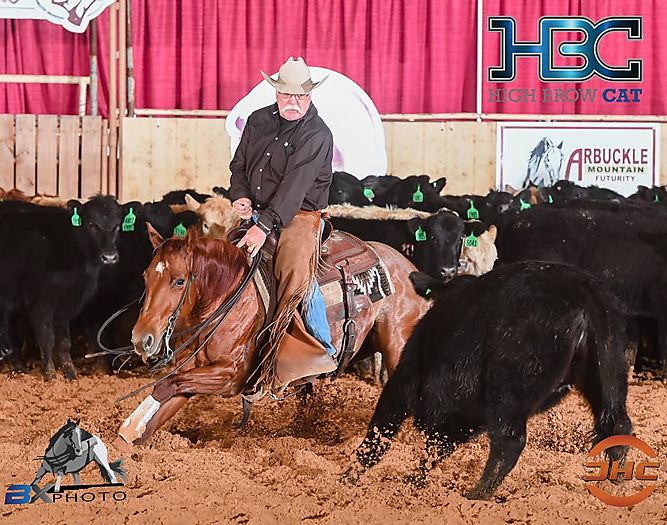 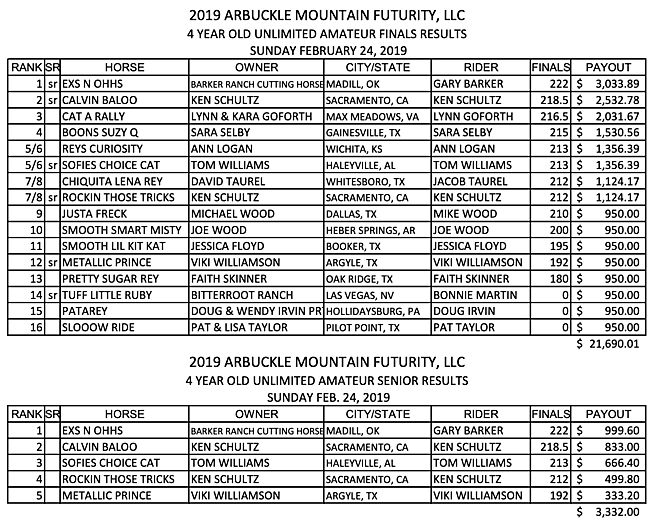 Next to go was the $50,000 Classic Amateur.  Richard Minnix marked a 221 riding Metallic Tax (Metallic Cat x Miss Wendy Rey) to take home the Championship and the $3,103.74 Champion’s check. 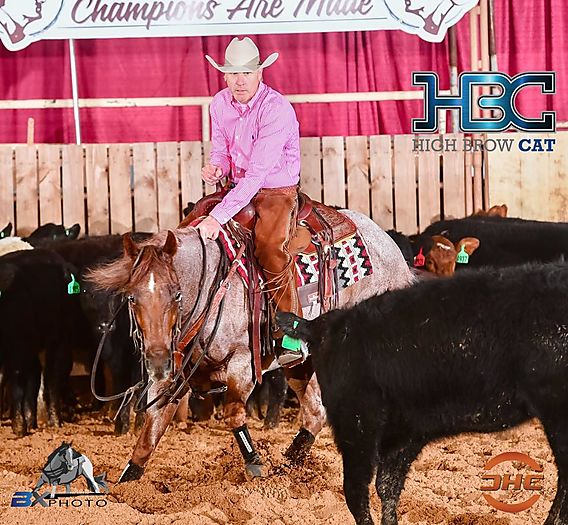 Reserve Champion was John Lavelle riding Missie Cat (High Brow Cat x Play Miss), owned by John and his wife Lora, marking a 217.  They received a $2,562.68 check for the Reserve Championship.  They were also the Senior Division Champions collecting another $1,536.64 for the day.

In the $50,000 Derby Amateur it was Rocky Davis and Her Royal Queen (One Time Royalty x Xquizit Cat) that claimed the Championship marking a 216.5.  They took home a $3,249.94 check for the win along with another $1,097.60 for the Senior Division Championship. 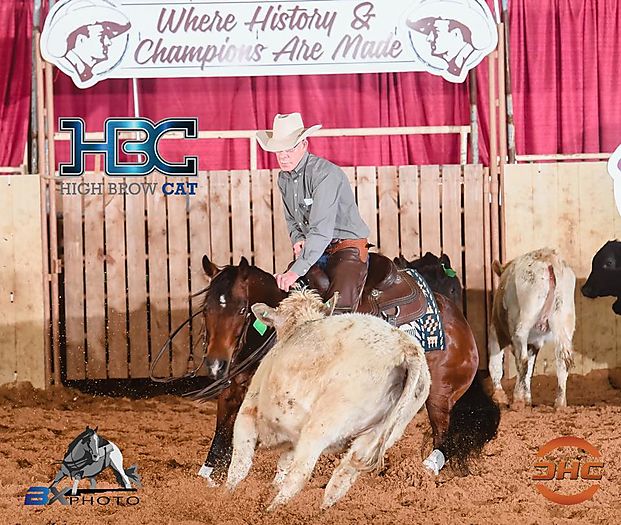 Rocky Davis and Her Royal Queen (Photo by BX Photos) 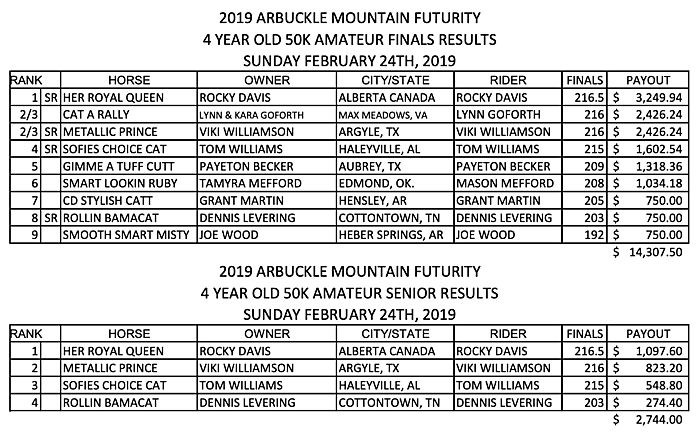 The final class of the day was the Classic Unlimited Amateur where Bonnie Martin and Reysin Kittens (Dual Rey x Kittens), owned by the Bitterroot Ranch) dominated the finals marking a 225!  They took home a $3,727.88 check with an additional $1,481.76 for the Senior Division Championship. 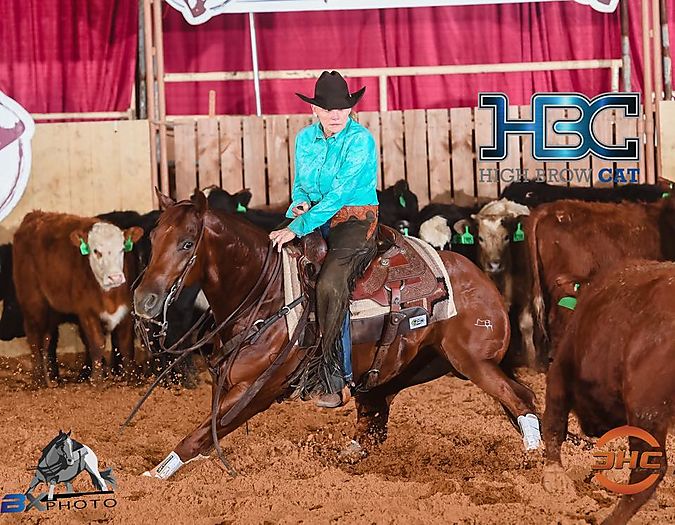 Reserve Champion was Michelle Barnes riding Catty Bluz (Catty Hawk x Gar Bella Lena), owned by Barry and Michelle Barnes, marking a 221.  They collected a $3,104.12 check along with the title. 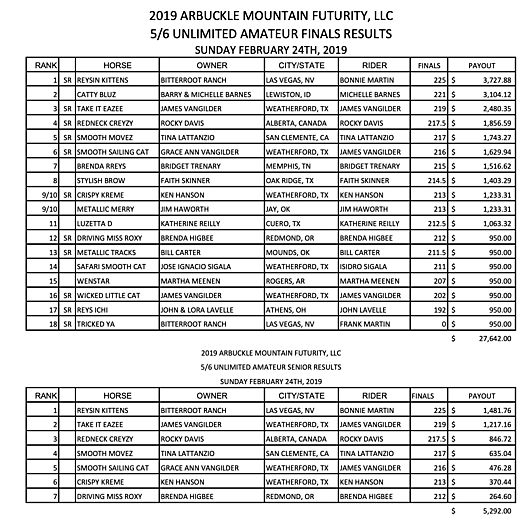 Congratulations to all of the Champions and Finalists at the 2019 Arbuckle Mountain Futurity!  Next up is the Cattlemens held in Graham Texas.  Safe travels to everyone and good luck from all of us here at Cutting Horse Central.